How to generate additional income from Australian share buybacks

Participating in off-market Australian share buybacks, is one way Plato generates additional after-tax income for retirees and other low-tax investors.

Off-market share buybacks are a way for companies to divert the franking credits on their balance sheets to the investors that value them most – zero-tax investors.

To provide an illustration of how low-tax investors can benefit from off-market share buybacks, let’s look at the Commonwealth Bank (ASX: CBA) off-market buyback that was completed in August 2021.

Commonwealth Bank was trading at $103 per share at the time and they were able to purchase back their shares in the off-market buyback at $88.62.

When you added that all together you actually found that the value for a zero-tax investor was just over $117 (because they get to reclaim those franking credits back from the government). This was 14% more than the current share price of Commonwealth Bank at the time. 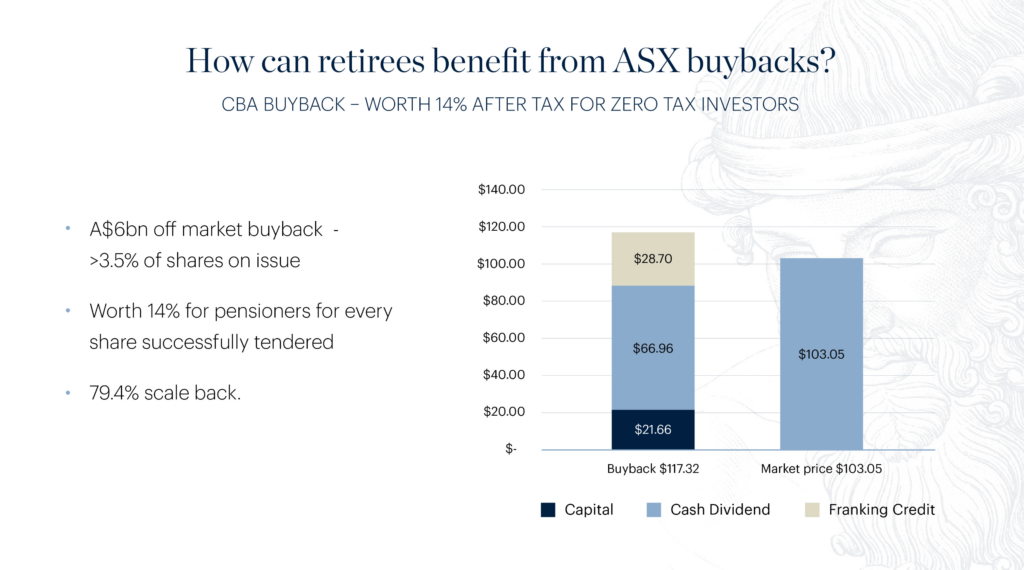 So you can see why off-market share buybacks was very profitable for zero tax investors.

The Plato Australian Shares Income Fund, is designed specifically for zero-tax investors, so we actually make all our decisions on the basis of how a zero tax investor benefits, thus we regularly participate in these buybacks.

Since inception of the Fund in 2011, we have gained about 40 basis points per annum just by participating in buybacks and added that to the total return of our investors.

We think it is a great way for investors to get the icing on the cake in terms of their income.

Read next: Why tax matters for income investors