The 2018-2019 financial year has seen a dividend windfall for investors from Australian resource companies, an industry that isn’t historically associated with high levels of income. The cause of this windfall has been strong commodity prices (particularly iron ore prices after the Vale dam disaster caused a significant reduction in Brazilian supply, which helps BHP, Rio Tinto and Fortescue) without significant re-investment, asset sell-downs (Rio Tinto sold its Coal mines and BHP its US shale assets) and the potential changes to franking credits if the ALP had won the Australian election. Some of the yields on the large resource companies are reported in the table below. The yields are presented including special dividends to show what investors actually received, and excluding special dividends to give an idea as to what the companies think is sustainable going forward (as companies issue special dividends when they don’t think they will be on-going). 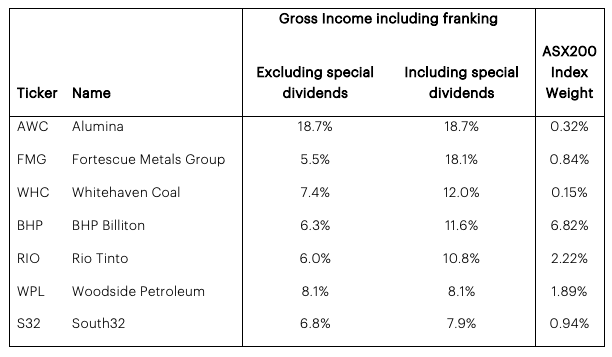 The above table does not include the BHP or Rio Tinto off-market buybacks where they returned a further $7.3B and $4.4B cash to shareholders respectively. All up, including the special dividend, BHP returned an additional $14.6B to shareholders, over and above their regular dividend payments. In terms of sustainability, assets sales and franking credit changes are not particularly relevant going forward but the first factor (high iron ore prices without re-investment) is definitely still relevant for the short-medium term, with iron ore prices continuing to increase as stockpiles in China reduce and the Australian dollar continuing to fall which helps profitability as the majority of their costs are in Australian dollars but their revenue is in U.S. dollars. In the longer-term, we expect iron prices to fall as Vale sorts out its tailings dam issues causing supply from Brazil returns to prior levels although this may take considerable time. For example, the Samarco mine has still not re-opened after its disastrous dam failure in 2015. In summary, in the short term we expect income levels from BHP, Rio Tinto and Fortescue to remain elevated.

There are a number of other resource stocks such as Woodside Petroleum, Alumina and South32 which are going through a period of reduced investment in their respective businesses allowing them to return more to shareholders as well as Whitehaven Coal which is enjoying high metallurgical coal prices particularly. These stocks have been returning high levels of yield and barring any significant reduction in commodity prices or change in management strategy, we expect these high levels of yield to continue. The increase in the gold price has yet to result in a significant increase in the yield of the gold miners such as Newcrest which have historically preferred to use cash flow to re-invest in their business but we’d be watching for a sign of a change in strategy before predicting elevated yields coming from the gold sector. The Plato Australian Shares Income Fund took advantage of this recent dividend windfall achieving a gross yield (including franking credits) of 15.1% p.a. in the 12mths to March 2019 for its investors and is well placed to capture further elevated income levels in the resource sector in a diversified, risk aware portfolio. Since its inception in September 2011, the Plato Australian Shares Income Fund has achieved an annualised gross yield (including franking credits) of 9.6% p.a.