Benefits of managing portfolios on an after-tax basis

In its 2018 report, the productivity commission mentions that there is a significant deficit in after-tax management in the accounts of superannuation members. This was a particularly timely comment as FY2018/19 was an extraordinary year for investors with regards to the distribution of franking credits by Australian companies, with the Plato Australian Shares Income Fund generating 4.8% return from franking credits, about twice what it normally generates and around three times the normal index level of franking.

There were a number of drivers of this massive level of franking, including record dividends from iron miners RIO, BHP and Fortescue, tax-effective buy-backs following asset sales from BHP, RIO and Woolworths plus the threat of the ALP franking policy flushing out dividends and franking.

This period has highlighted the benefits for low-tax investors of managing their portfolios on an after- tax basis. However, most investment performance surveys don’t include franking credits which makes the alpha generated by after-tax management (which one could argue is more sustainable given its unlikely to be arbitraged away) largely invisible to investors. This is particularly relevant in a year when the active management industry has struggled in Australia.

Starting with the basics, in Figure 1 we show the current after-tax value of one dollar of pre-tax return for four types of investment returns;

We calculate after tax values for various marginal tax rates, including the 2% Medicare Levy for individuals. Fully franked dividends are currently the most valuable form of return for all Australian investors bar those investors on the very highest 45% tax rate, where the 50% CGT discount makes a long-term capital gain the most valuable. Tax-exempt investors like charities and pensions phase superannuation don’t pay capital gains tax, but other taxed investors do. Taxed investors have a particular aversion to realising short term capital gains, which is often why low turnover strategies are considered tax effective. If investments are being managed in a commingled pool, then those assets will likely be managed on a before tax basis as it is not possible to optimise an after-tax outcome for multiple investor types at the same time. This may leave after-tax alpha “on the table” for many investors.

So, in addition to the changes investment managers can make to their portfolio (detailed below), superannuation funds can also structure their affairs in better ways in order to make the generation of after-tax alpha possible. This includes segregating the assets of their accumulation and pension pools so that these assets can be managed separately. As more Australians move into retirement, the percentage of assets in pension phase will likely increase for most if not all large superannuation funds making the segregation of these assets more practical as well as being more important. It is common for Australians to start actively engaging with their superannuation fund as they approach retirement so it is important that these superannuation funds can show that they specifically tailor their portfolios for pension phase investors.

Tax-effective off-market buy-backs highlight the benefits of managing investments from the after-tax perspective of the client rather than on a before tax basis. Tax-effective buy-backs always lose money on a before tax basisi1, but add value after tax for tax-exempt investors, and usually, but not always, for low taxed investors (15%/19% tax rates). However, in our experience, these buy-backs lose money for highest taxed individuals.

Buy-backs added considerable after tax value for tax-exempt investors in FY2019. Rio Tinto, BHP Billiton, Caltex and Woolworths all completed buy-backs in FY19, adding approximately 20% to total returns including franking credits for each share successfully tendered for investors on a zero tax- rate, but note that buy-backs are usually subject to scale-backs. BHP undertook a $7.3B buyback which was worth 21% for zero-tax investors with a 59% scale back and added 0.8% in after-tax alpha to tax-exempt investors in our Plato Australian Shares Income Fund. Figure 2 displays the value from participating for tax-exempt investors in the BHP buyback. Most managed funds do not participate in buy-backs, because they lose value pre-tax as the cash proceeds are less than the market price. 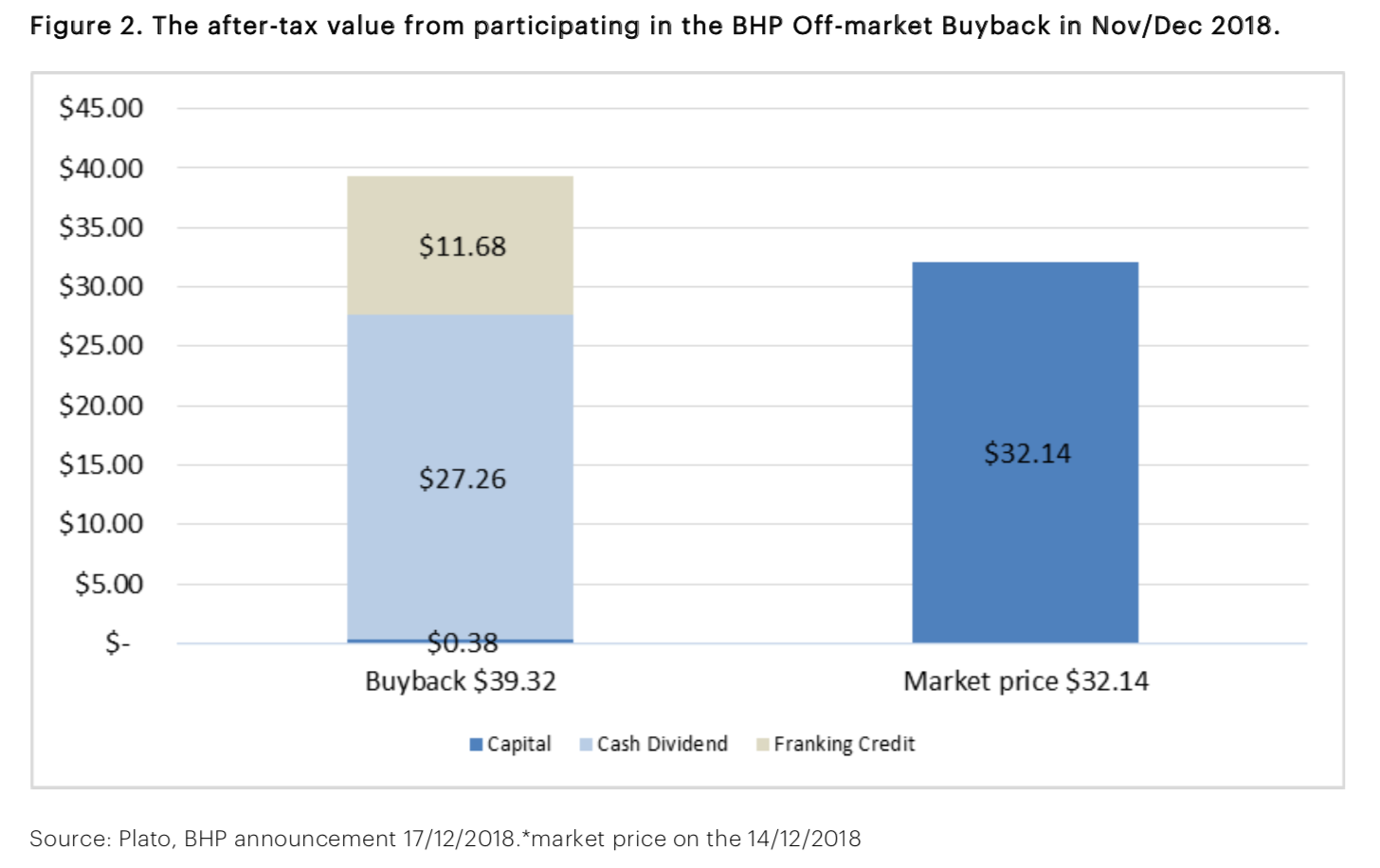 Plato manages the majority of its Funds Under Management on an after-tax basis, and in our Income/Tax-Exempt strategies, off-market buybacks added 1.2% in after-tax alpha in FY18/19. Given the extraordinary nature of the last financial year, we think a more realistic after-tax alpha target by participating in off-market buybacks going forward would be 0.4% p.a.2 which is the alpha our income strategy has earned since its inception in November 2010. In FY2019-2020 so far two additional off- market buybacks have been announced by Qantas and McMillan Shakespeare.

Managing on an after-tax basis for clients doesn’t just involve participating in off-market buybacks. Investors should be valuing franking credits, particularly tax-exempt investors who receive a full refund of franking, and for taxed investors they should be taking account of the impact of capital gains tax.

As a final indication of the importance of after-tax management, we have estimated the difference between our active returns before-tax and after-tax for the Plato Australian Shares Income Fund. Since inception in September 2011, Plato has added 1.3% p.a. more in after-tax alpha compared to pre-tax alpha for tax-exempt investors. Over the last financial year, however, the difference has blown out to a massive 3.6%, a huge difference to performance. We think Australian investors should be taking advantage of this potential after-tax alpha, particularly in an environment where future return expectations have been lowered.3 The question investors should be asking is are their investment managers maximising returns based on their specific tax circumstances and are their superannuation funds structured in such a way to make this possible.