How retirees benefit from franking credits

Self-funded retirees and many other income investors continue to be stung by monetary policy decisions. However, taxation benefits in the form of franking credits remain unchanged.

In this historic low-yield world it is more important than ever for retirees to ensure their equity investments are effectively managed, so their taxation benefits are maximised.

After all, while dividend income has been reduced by the impact of COVID-19, it remains relatively strong compared to the income from other asset classes, particularly after allowing for the value of franking credits for domestic investors.

On our calculations, the market level franking credit yield alone (not to mention the cash yield investors receive from dividends) is considerably higher than the yields available on term deposits and overnight cash.

There is unlikely to be any respite from these low cash rates with the RBA noting in its decision to cut overnight rates to 10bp on Melbourne Cup Day – “Given the outlook, the Board is not expecting to increase the cash rate for at least three years.”

Before we look at franking credits and how they can be a great top-up for savvy income investors, we want to highlight our income forecast for the next 12 months across asset classes. The above has been updated following the most recent move by the RBA to slash interest rates to a never-before-seen 10 basis points and the caveat that the record-low rate is likely to remain in place for the next three years.

While returns on cash, bond yields and term deposits continue to languish, Australian and global equities remain a shining light for income in the low-yield environment.

It seems odd to think that Australia’s taxation system may actually provide you with greater returns than many asset classes, but that’s the situation retirees may find themselves in today.

Here, you can see the after-tax value of one dollar of pre-tax income for three types of tax classes. 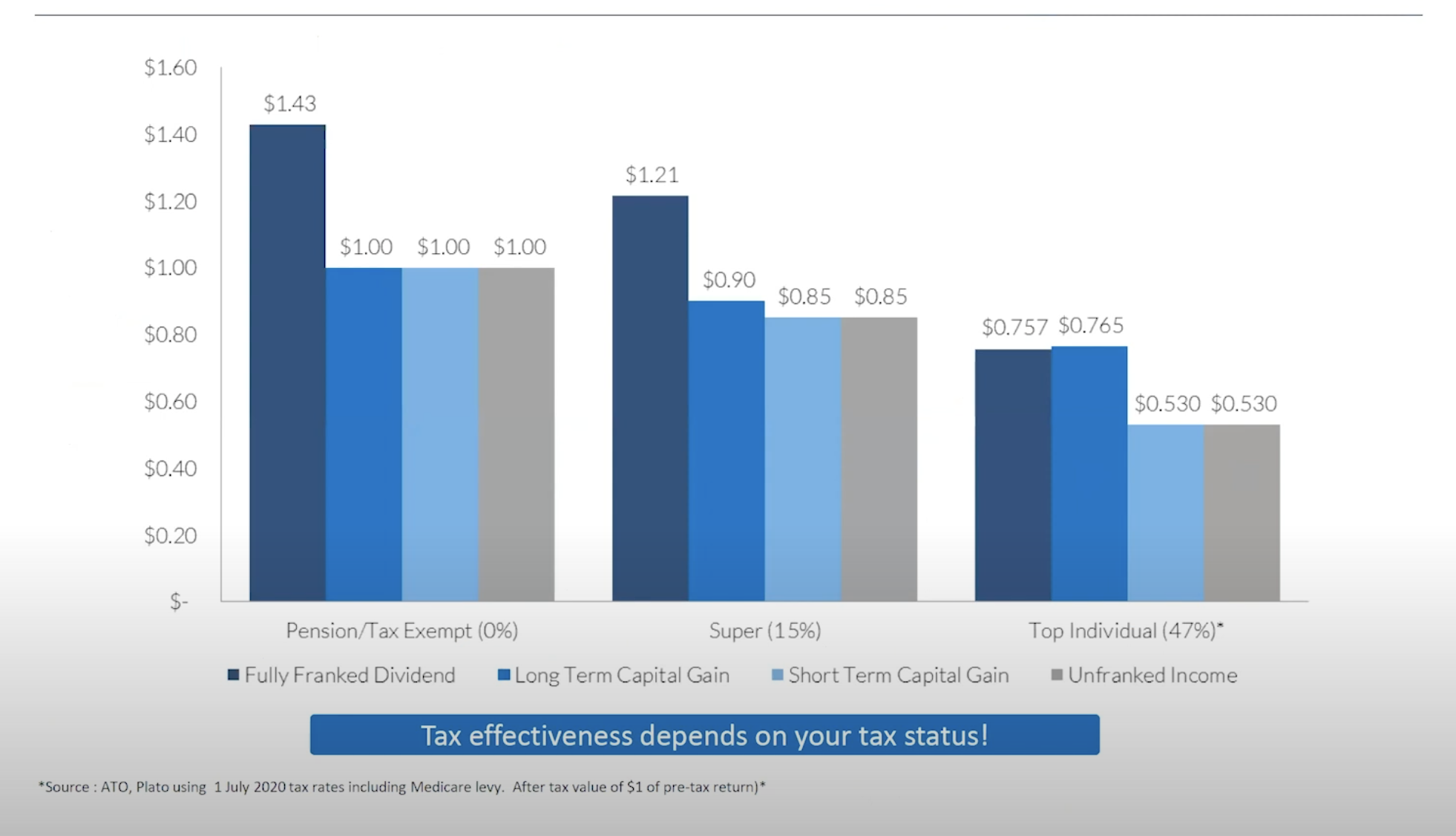 For pension phase and tax-exempt investors, one dollar of pre-tax income from fully franked dividends is actually worth $1.43 after receiving the franking refund. This is additional income that is no doubt much needed by many.

For superannuation investors, you can see franking is also the most tax effective form of income, however at the top taxation level, investors benefit the most from the 50% CGT discount which makes a long-term capital gain the most valuable.

Where to for franking income?

In today’s market there are many options for investors looking to boost their income from franked dividends. Investors should, however, look outside of the traditional dividend payers for the highest levels of gross income.

Leading the pack is Fortescue Metals Group where tax-exempt investors can get a gross yield including franking of 14.5%. This includes 4.3% in franking alone – in itself, a higher return than many other asset classes.

We maintain a positive outlook for the price of Iron Ore and believe Fortescue will continue to pay out a strong dividend for the foreseeable future.

Below, we have also provided the Franking Yield on offer from other key holdings including, BHP, Wesfarmers, Rio Tinto and JB Hi-Fi. You can see how a portfolio focussed on franking can achieve significant additional income for retirees.

Unfortunately for retirees, few investment managers or individuals actually manage their share portfolios with these taxation circumstances in mind, which can add considerable alpha and go a long way to helping pay the bills.

Along with favouring business that pay franked dividends, retirees’ portfolios should also take advantage of tax effective buy-backs, something we’ll begin to see re-emerge in the post-COIVD-19 world. Buybacks are another thing many managers also leave on the table, disadvantaging retirees.

The bottom line is, retirees are different and they should ensure their portfolios are managed differently to maximise their after-tax alpha potential.

This article by Dr Peter Gardner was first published on Livewire.